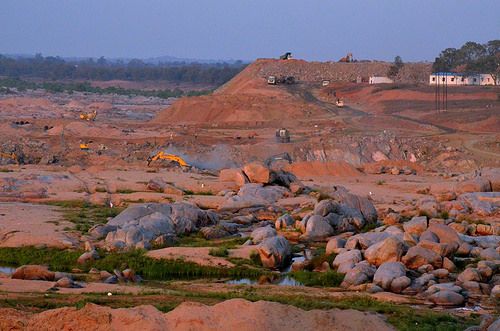 The much awaited judgment on construction of Kanhar dam was pronounced today at Faridkot House, by the Principal Bench of National Green Tribunal chaired by Justice Swatanter Kumar.  The petition was filed by Advocate Parul Gupta on behalf of the applicants- Debadityo Sinha, Vindhya Bachao Abhiyan and Om Dutt Singh, People’s Union for Civil Liberties before the Principal Bench, National Green Tribunal on 22nd December, 2014. The matter was reserved for judgment on 24th March, 2015.

The application was filed by the applicants against the ongoing construction activity of the Kanhar Irrigation Project in district Sonebhadra, Uttar Pradesh in violation of the provisions of EIA Notification, 2006 specified under the Environment (Protection) Act, 1986 and the Forest (Conservation) Act 1980. The applicants in their pleadings have submitted that the project undertook minor digging work (preparatory work) till 1989 and subsequently was left abandoned by the State for several years. Since the construction of the project was commenced in December, 2014 i.e. after a long period of

suspension for almost 25 years, the applicants filed the abovementioned application before this Hon’ble Tribunal seeking an immediate stay on the construction activities on the ground. It was contended that as the project is undertaking its construction now, the same shall adhere to the present laws and be permitted to be carried out only after a detailed environment impact assessment of the project taking into account the present environmental and ecological conditions of the area.  Approximately 2400 Acres of Forests needed to be diverted, for which the applicants claimed that the State Govt. of Uttar Pradesh also need a ‘Forest Clearance’ from Central Government.

Following is some excerpts from the original judgment, also available on NGT website

In  the  application,  there  is  no  prayer  for  setting  aside of  the Environmental Clearance dated 14th April, 1980. There is no Forest Clearance  placed  on  record  by  any  of  the  parties  before  the Tribunal. We  are  not  inclined  to  accept  the  contentions  of  the applicant and grant prayer that the project work should be stopped and it should not be permitted to continue till the Project Proponent seeks fresh Environmental Clearance. In our considered opinion, it would  neither  serve  the  interest  of  the  environment  or  ecology  nor would  it  serve  public  purpose. Huge  amounts  have  been spent  on this  project. The  project  which  was  expected  to  cost  the  nation 27.75 Crores, is  now  costing  the  country 2252.29 Crores at  2013 price level. Stoppage  of  work  would  further  enhance  the cost  of construction  and  would  be  unnecessary  burden  on  public exchequer.

Applying the principle of sustainable development, while giving  due  regard  to  the  protection  of  environment  and while ensuring  that  no  irreversible  damage  and  degradation  of environment is permitted in terms of Section 20 of NGT Act, we are constrained to  issue certain directions. We  find  it  inevitable  for us to  issue  directions  keeping  in  mind  peculiar  facts  and circumstances of the present case, thus, the following order:

(1) We constitute the following Committee which shall submit the report to the Tribunal on the issues stated hereinafter and in light of this judgment:

(2)  The  Committee  shall  specifically  report  whether  the conditions  imposed  in  the  consent  order  dated  14th  April, 1980 and 27th February, 1982 of the Forest Department have been strictly complied with or not, in all respects.

(3)  The  Committee while  examining  the  compliance  of  the conditions, as noticed above, shall specifically report whether the conditions have been complied with in its entirety or not. What is the status thereof and what steps are required to be taken in that regard?

(4)  Whether  there  is  complete  and  comprehensive Resettlement and Rehabilitation Policy in place in relation to the project.

(5)  Modifications in  execution  of  the  project, if any,  required  to ensure  protection  of  environment  and  ecology  in  the execution of the project in question.

(6)  The  Committee  is  required  to  make  its  general recommendations,  measures  and  the  conditions  that  should be imposed upon the project proponent to ensure that further progress of the project does not have any adverse impacts on ecology,  environment,  rivers,  hydrology, biodiversity  and  on all the surrounding forests, villages and tribes.

(7)  The  Committee  shall  assess  and  examine  the  present  status of  the  compensatory  afforestation  done  by  the  forest department  during  1984,  85  and  86  over  an  area  of  666 hectares  and 80 kms  on  the  road  side. The  Committee shall make assessment of the survival percentage and the present status of compensatory plantation through random sampling.

(9)  The  Project  Proponent  shall  not  take  up  any  new  activity  on the  additional  forest  area  of  441.07  hectares  proposed  to  be acquired  unless  specific  permissions  under  the  Forest (Conservation)  Act  1980  is  taken  and  the  area  diverted  for non forest activity by the Competent Authority.

(10) The Committee shall study the impact of loss of 980 hectares of  forest  area  which is comprised of  wild  life  habitats  with specific  reference  to  the elephant  corridor,  rich  floral  and faunal diversity.

(11) Undertaking  Social  forestry  in  resettlement  colonies  of  the displaced  persons  was  one  of  the  conditions  of  EC. The Committee  shall  examine  whether  social  forestry  for ameliorative  measures  against  air pollution  and  adverse impact on local ecology and environment has been taken up and  to  what  extent.  The  committee  shall  also  suggest measures as  to how the resettlement colonies particularly, if located close to the industrial clusters of Sonbhadra, can be protected  from  the  adverse  effects of  thermal  power  plants,
coal  and  bauxite  mining,  aluminum  and  cement  industries, particularly, form  the  air  and  water  pollution  and  health impacts due to Mercury, Arsenic and Fluoride contamination and  as  a  consequence of  the  presence  of  large  number  of industries  in  the  District  of  Sonbhadra  in  particular  and Singrauli in general.

(12) In the light of the fact that the Kanhar River flows through to a  drought  prone  area  where  water  is  a  critical  input  for  the life  supports  systems,  both  on  land  and  within  the  aquatic ecosystem,  the  Committee  should  examine  maintenance  of certain  minimum  environmental  flow  downstream  of  the Dam.

(13) The  Committee  while  preparing  the  comprehensive  report shall take into consideration, if there is any adverse impact of the works already executed, on the environment and ecology of the areas and the remedial steps that should be taken.

(14) The  Project  Proponent  shall  complete  the  construction  or activity that is under way and would not commence any new activity  or  construction  without  specific  recommendations of the Committee in that behalf.

(15) The  Committee  shall  pay  specific  attention  in  regard  to  the conditions  that  should  be  imposed  upon  the  project proponent  for  conservation,  protection,  reforestation, restoration  of  environment  and  ecology  wherever  any environmental  damage  or  degradation  has  occurred  as  a result of this project.

24.  In view of the fact that we are finally disposing off the Original Application,  M.A.  No.  902  of  2014  (praying  for interim  stay  on  the further progress and construction of the project) and M.A. No. 14 of 2014 (praying for taking of action against respondents for violating the orders of the Tribunal on 24th December, 2014) do not survive for consideration of the Tribunal and are, therefore, disposed of as such.

I have rather a mixed opinion for the judgment. Although it approves all the major contentions raised by us that the old clearances of 1980's holds no good with respect to the present changes in the environmental conditions, it has disallowed halting construction activity on account of the fact that huge amount of money has already been spent on the project and delaying the same at present for want of fresh clearances under law would neither serve the interest of the environment or ecology nor would it serve any public purpose. Although certain directions for formation of an expert committee have provided a part relief yet the decision gets tilted in favor of the State due to the fait accompli created by them.  -Parul Gupta, Advocate for the Applicants

The judgment says that ‘very substantial work of the project is still to be completed’ and has agreed that the project is nowhere near to completion. A committee is formed of experts of Ministries, PCCF and IIT Kanpur which is virtually the specialized monitoring body being formed by court for this particular project which will deal with the critical issues like complete R&R and  would study the environmental and ecological impacts from all aspects including environmental flow requirement of river and impacts on elephant corridor. Although the judgment allowed the construction which is underway, it has stated that approval of the Expert Committee would be required for any new construction activity. If these directions are implemented in letter and spirit, it would provide relief to a certain extent.-Debadityo Sinha, (Vindhya Bachao Abhiyan) and Petitioner

After the elaborate and severely adverse analysis, the decision is a complete non sequitur. I kept reading the observations with full assent and was jolted when I came to the decision. - Padmashri Dr. Ramaswamy R. Iyer, Former Secretary Water Resources, Govt. of India

This is most disappointing and inconsistent order. - Himanshu Thakkar, South Asia Network for Dams, Rivers and People