While the temperature in the hills are already touching 45 degrees in the district, the wild animals including several Schedule I and threatened animals living in the forests are facing a great danger. While this year, there has been a series of man-animal conflict in which one died due to Sloth Bear attack-the situation seems to get worse now. There are increasing reports of forest fires from some of the critical wildlife inhabited forests such as Drammadganj and Marihan. Due to difficult terrain and at higher elevations, it is reported that the forests burnt continuously for 5 days last week and it has affected a major portion of the forests. Our sources informed that these fires may be of anthropogenic origin as movement of people in these forests are very frequent for collection of fuelwood and grazing of livestock. There are number of beehives in the forests and people often use fire to scare off the bees, which may have spread to the forests. Forest fires has been also used in the past to clear off forests for making way to encroachments, and therefore the possibility of intentional fire may not be ruled out. Whatever the reasons may have been, there has been serious loss to forests already, most of which are habitats of Sloth Bear, Chinkara, Blackbuck, Bengal Monitor, Leopards and many other protected animals.

While the local administration has been busy coping with forest fires since March, the newspapers have reported that the water holes in Kaimoor Sanctuary has dried up. Last year there has been very less rainfall and the remaining water sources face high competition from villages and domestic animals, making them highly vulnerable to man-animal conflict. Mr. O.P. Singh, DFO-Kaimoor WLS informed to a local newspaper that the division is working to refill the water holes by tankers. 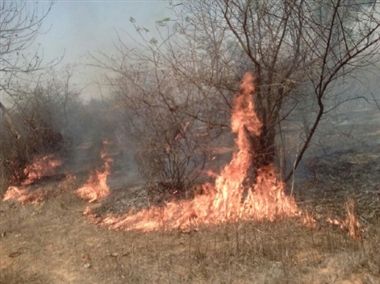 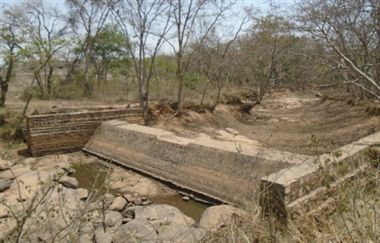 (All photos from news reports)